World AIDS Day 2019 is the 32nd commemoration of World AIDS Day since its first recognition by the United Nations in 1988. The UN theme for this year is "Communities make the difference".[1][2][3] It is the last World AIDS Day before UNAIDS' 90–90–90 target for Treatment as Prevention is supposed to be fulfilled in 2020.[4] UNICEF statistics released for the observance showed that over 300 children and adolescents still died every day from AIDS-related causes in 2018, and only half of those under 15 with HIV were receiving antiretroviral therapy.[5]

The World Health Organization is releasing the new “WHO consolidated guidelines on HIV testing services” to standardize and modernize testing and treatment practices worldwide,[6][7] and to support greater use of self-testing, particulary in Africa.[8]

It is also the 30th commemoration of the Day With(out) Art.

English Wikipedia has highlighted World AIDS Day in "On this day" on the Main Page for December 1 for every year since 2005, and a number of other language editions have done similarly.

In the Wikipedia vital articles system, the HIV/AIDS article is considered a Level 3 in terms of priority, as part of the 1,000 most important topics for any language edition of Wikipedia to cover. It has been rated "Good Article" on English Wikipedia for its quality since 2012, and was previously a "Featured Article" from 2006-2008.

World AIDS Day is being commemorated by governments across Africa, including Nigeria,[9] Tanzanaia,[10] Ghana,[11] and South Africa.[12][13] Tanzania lowered the age of consent for self-testing kits from 18 to 15, fitting into a WHO drive for greater self-testing.[14]

The International Conference on AIDS and Sexually Transmitted Infections in Africa (ICASA2019) is being held in Kigali, Rwanda from December 2-7 for World AIDS Day with the theme this year of "AIDS FREE AFRICA - Innovation, Community, and Political Leadership".[15] 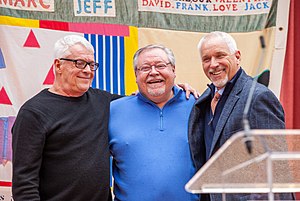 The US government theme for this year's commemoration is "Ending the HIV/AIDS Epidemic: Community by Community".[16] President Trump issued a proclamation on November 27[17] reiterating a commitment first made during the 2019 State of the Union Address to reduce HIV 90% by 2030, subsequently developed by the federal government as "Ending the HIV Epidemic: A Plan for America"[18][19], but his proclamation notably omitted any mention of the LGBT communty.[20] Donations of Truvada to uninsured patients are set to begin on December 2.[21]

Culturally, the AIDS Healthcare Foundation will host major free concerts in the US cities of Dallas, Los Angeles, Miami and Atlanta, with the largest featuring Diana Ross in Dallas on November 29.[22] Broadway Cares/Equity Fights AIDS and mothers2mothers will hold a fundraiser with performances by HIV+ artists at "The Red Ribbon Revue" to be held at Abrons Arts Center at the Henry Street Settlement.[23]

It was announced that NAMES Project AIDS Memorial Quilt is returning "home" to San Francisco and the National AIDS Memorial Grove after 18 years in Atlanta, with the first panels being flown into the city in advance of World AIDS Day.[24][25][26] Leslie Ewing, an early leader of the Quilt, is honoree at the Grove this year.[27] And Jack Porter, an activist who helped keep the memory of the Grove and died in November, is also being commemorated there on World AIDS Day, at which he had always been a leading volunteer.[28]

There will be a candlelit vigil at the New York City AIDS Memorial for World AIDS Day, that will then proceed to St. John’s Lutheran Church on Chistopher Street.

A Keith Haring sculpture was installed as centerpiece of the planned future AIDS Garden Chicago.[29][30]

In Pittsburgh, Pennsylvania, The Andy Warhol Museum is featuring a display from the Illuminations series by Jordan Eagles projecting images of blood as a comment on the FDA's controversial blood donation restrictions.[31] In Los Angeles, California, the Fowler Museum at UCLA has a photography exhibition, "Through Positive Eyes".[32]

Authorities in Baton Rouge, Louisiana, attributed a decrease in new AIDS cases (from #1 in the country to #10) to a program for the more widespread adoption of "opt-out" HIV-testing in public hospitals.[33]

The Indian pharmaceutical company Cipla, together with the Drugs for Neglected Diseases Initiative, announced the development of a strawberry-flavored formulation of medication, mixable in food, that is suitable for the treatment pediatric HIV.[34]

In Pakistan, a 10-day public campaign was launched in Quetta by Balochistan AIDS Control to spread awareness of the issue.[36]

The European Centre for Disease Prevention and Control and regional WHO office released a study showing that 54% of European women with HIV recieve a late diagnosis, and 60% among those aged 30-49.[37]

The French government's statement highlighted its increased controbution at the The Global Fund to Fight AIDS, Tuberculosis and Malaria repleneshment meeting held in Lyon.[38]

In the UK, Labour and the Liberal Democrat pledged universal access to PreP in the run-up to the December general election.[39] Grassroot Soccer held a major fundraiser in London ahead of World AIDS Day. A World AIDS Day Mass is planned at the Farm Street Church in London on December 2.

The first HIV+ sperm bank was launched by activists in New Zealand, as an effort to reduce stigma and demonstrate the condition of undetectable viral load.[40]

Nonwithstanding any claims elsewhere, this page is NOT available under the CC-BY-SA license and should not be reused.

Fixing that is in progress. See Talk:Copyrights and phab:T248271.