krv/AV/ica is a project to support, instigate, document and mediate activities of situated art practices where in/around Krvavica building as used in venues and locations by artist and creatives to: engage, perform, mediate, educate and express, predominantly in the intervention mode, rather just as a space for presentation. It also aspires to institute sustainable artistic and cultural futurity into the present (su)realities of the building turning into ruin, as well as to weave the social fiber that is missing for its re-activation as (trans)local + trans(temporal) context of collectivized (not privatized) desire... Activity of mediation and education using open content, FLOSS tools and participatory methods of commoning is started by ~Zblace. 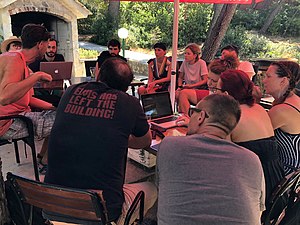 Local artists and creatives work erratically inter-ween in the space. They document interventions on social media using https://www.instagram.com/krvavica_art/ Hopefully with adopting the use of digital commons this will diversify in format and increase the resolution of material.

During the summer season many tourist come across Krvavica building, during their vacations and decide to investigate, record and some even publish their impressions inspired by the relic building of which they know little. Some better informed also exceptionally come specifically with the intent to see the building and register their founding like Pepper Urbex - urban/decay explorer or more prominent and exhaustive project - SpomenikDatabase...

in space > to web and back

Project is be visible in the space of the main building using printed QR codes that would connect to via w:QRpedia (to Krvavica as a village in Wikipedia), [Wiki tool Reasonator] (to krv/AV/ica project across Wikimedia) and potentially in the future on www.Archive.org

Wikipages produced in the process will be geo-tagged to appear in Wikipedia mobile app and other tools that use WikiData to display relevant documented objects in space.