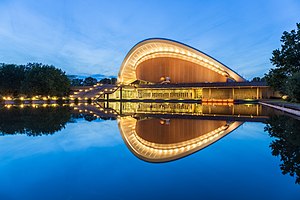 Vorratskammer / Pantry was a project by the artist group myvillages.org. The larder / pantry was filled in order to serve the visitors of the Über Lebenskunst festival at the Haus der Kulturen der Welt (House of the World's Cultures) in Berlin in 2011. Over a year long period the artists filled the pantry with goods from local ressources to prepare food for around 8000 visitors.

The concept of the "VORRATSKAMMER / PANTRY" went far beyond the simple act of eating: it had to do with how food was collected, its origins, the way it was traded and exchanged and relevant stories. All of these elements were part of this project. Producing and eating food was considered a cultural and social activity that is closely intermingled with farming and processing traditions as well as land use.[1]

Vorratskammer (Pantry) was the central metaphor of this work: it created a connection between places, producers, cultural production and the visitors of the festival. The collecting and origin of the food, forms of trading and exchange and the associated stories were part of the project. In this way, this project should create an image of the city of Berlin.[2]