The Richard Demarco Gallery operated from several venues in Edinburgh between 1966 and 1992.

Starting in 1974, introduced by the art therapist Joyce Laing, the Gallery became associated with the work being produced in the Barlinnie Prison Special Unit, particularly by Jimmy Boyle. Joseph Beuys represented Boyle at a 1976 exhibition of his work and in his Art = Kapital/Jimmy Boyle Days action and hunger strike in 1980.

In 1980 the Scottish Arts Council ceased funding for the Gallery, triggered by its disapproval of Demarco's ongoing association with Beuys. Thereafter the Gallery functioned intermittently at several venues. 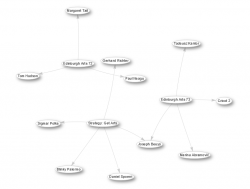 Some network links developed during 1970-73. (Snapshot view from Wikidata query.)

Some of the important links established in the Gallery's early years were:

The Demarco European Art Foundation archives are held and exhibited at Summerhall in Edinburgh.