Artist-run spaces have become an important part of the environment in which art is created, viewed and discussed. 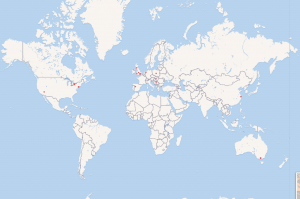 Map showing locations of those artist-run spaces, initiatives and collectives recorded in Wikidata. The map can be explored dynamically using this Wikidata query.
(The sparseness of this map in comparison with the operating spaces to be found in most cities indicates a substantial gap in information regarding those at the edge of encyclopaedic notability.)

Often such spaces exist for only a few weeks, for example using a short-term shopfront or a warehouse earmarked for redevelopment. Others such as Transmission Gallery have sustained for the long-term, regenerated by generations of emerging artists and their changing genre interests. This is also the case with those exhibiting spaces which have emerged in association with the sharing of a specialist resource, for example Print Studios or a Photographic or Video Workshop.

Because of their transient nature, artist-run spaces can fail to register as individually notable on a more instititutional museum-centric view of the arts. Nonetheless they can be seen to be important for the individual and for the locale. Emergence of such spaces has been associated with the initial stage of gentrification of urban areas which have been in decline, sometimes criticised as "artwashing".